Newsom budget would cut some money for flood protection 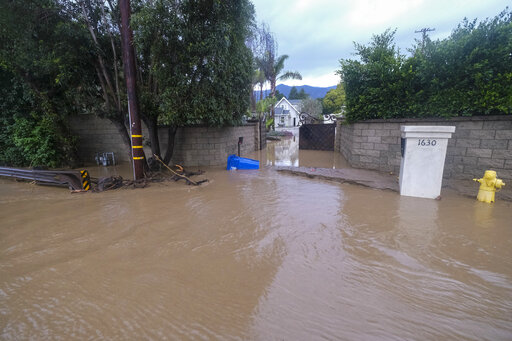 FILE - A driveway is flooded by the overflowing San Ysidro creek on Jameson Lane in Montecito, Calif., on Jan. 10, 2023. California Gov. Gavin Newsom has proposed cutting $40 million from the state budget for floodplain projects to help balance the state budget. The Newsom administration says the projects could be funded from other places in the budget. But advocates say the decision will lead to significant delays if it stands. (AP Photo/Ringo H.W. Chiu, File)[ASSOCIATED PRESS/Ringo H.W. Chiu]

Newsom’s budget proposal, released last week, cuts $40 million that had been pledged for floodplain restoration projects along rivers in the San Joaquin Valley, an area at high risk of catastrophic flooding.

Those projects would allow for rivers to flood in strategic places during winter storms or the spring Sierra Nevada snowmelt, reducing the risks for populated areas downstream while also benefiting environmental ecosystems.

Newsom approved that money last year, when the state had a record budget surplus of around $100 billion. Just a few months later, things have changed dramatically as a sluggish stock market has slowed the state’s economy, reducing the amount of taxes the state collects. Now, Newsom says California will have a $22.5 billion deficit this year.

The governor’s plan to cover that relies in part on cutting $9.6 billion in spending, including the $40 million for the floodplain projects. It would restore the funds in 2024 if they are available. 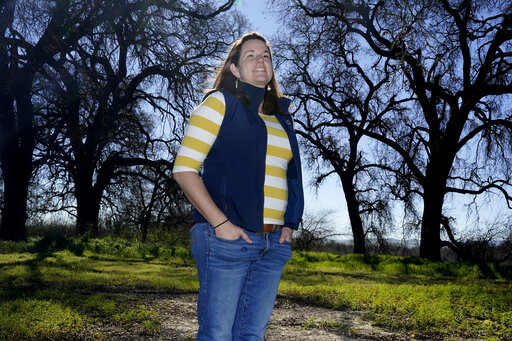 FILE - Julie Rentner, president of the nonprofit River Partners, stands by a small grove of trees during a tour of the Dos Rios Ranch Preserve in Modesto, Calif., on Feb. 16, 2022. Rentner has criticized Newsom's plan to cut $40 million from the state budget for projects that would restore floodplains. (AP Photo/Rich Pedroncelli, File) 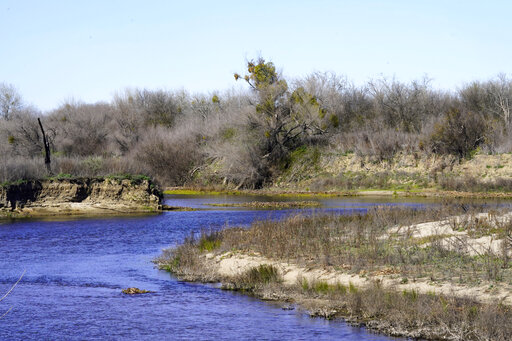 FILE - The Tuolumne and San Joaquin rivers meet on the edge of the Dos Rios Ranch Preserve in Modesto, Calif., on Feb. 16, 2022. The 2,100-acre preserve is California's largest floodplain restoration project, designed to give the rivers room to breath and restore traditional riparian habitats. California Gov. Gavin Newsom has proposed cutting $40 million from the state budget for floodplain projects to help balance the state budget. (AP Photo/Rich Pedroncelli, File)

“I see it as prioritizing winners and losers in California — and we’re the losers,” said Barbara Barrigan-Parrilla, executive director of Restore the Delta, an environmental advocacy group.

The Newsom administration would cut that money because “we are facing serious economic headwinds,” said Wade Crowfoot, secretary of the California Natural Resources Agency. He said those floodplain restoration projects are eligible to get funds from other places, including the state’s Sustainable Groundwater Management Program and the Wildlife Conservation Board.

The decision was made in early December, weeks before record rainfall hit the state, and Crowfoot acknowledged the recent storms could change the administration’s thinking. The budget won’t be finished for months and will be changed multiple times, he noted.

“I think clearly these storms and the flooding impacts they have created have elevated policy makers’ understanding of the importance of flood investments,” Crowfoot said.

For more than 100 years, Californians have tried to tame their rivers with a complex system of dams, canals and levees that have transformed the state’s Central Valley into fertile farmland.

But recently state officials have been rethinking that strategy by returning large swaths of land to floodplains.

One celebrated example is the Dos Rios Ranch Preserve in Modesto, which marked its 10th anniversary last fall with a ceremony attended by high-level Newsom administration officials. The project has been so successful that it was one of the reasons the governor signed off on the $40 million for similar projects.

The money was set to pay for nine floodplain reconnection projects that are ready to begin plus help another six that are still in the planning process, said Julie Rentner, president of River Partners, a nonprofit that is managing the projects.

“The work has stopped,” she said.

Newsom can’t sign the budget into law until it has first been vetted by the Democratic-controlled state Legislature, a process that will last for much of this year. But announcing the cuts essentially puts the money on hold, stalling projects.

Adam Gray, a former Democratic member of the state Assembly who pushed for the funding, said it was “one of the most exciting things I worked on in the 10 years I was in the Legislature.”

“I was extremely thrilled to have gotten it done, but now we can’t move forward,” he said, adding: “I’m hoping the governor will see the wisdom in restoring that money.”

Newsom’s budget plan does contain other funds targeting flooding. He proposed more than $200 million in new spending on flood protections, including $135.5 million over two years to reduce urban risk; $40.6 million to strengthen levees in the Sacramento-San Joaquin River Delta; and $25 million to reduce flooding risks in the Central Valley.

Since 2021, Newsom and state lawmakers have committed to spend roughly $8.7 billion on the paradoxically connected issues of drought and flood. The governor’s budget would lower that by about $194 million, a cut that doesn’t include the $40 million for floodplain projects.

Crowfoot said it’s still by far the most the state has ever committed to those issues.

“I think our commitment to flood investments are pretty clear,” Crowfoot said. “We have to balance a budget with less revenue this year. Even given that, we’ve proposed more funding for flood investments.”

But environmental advocates say more must be done.

Under the Central Valley Flood Protection Plan, the state historically has averaged about $250 million on flood management. Last year state regulators updated it to call for an increase to between $360 million and $560 million, noting that in a worst case scenario, flooding could cause up to $1 trillion in damage.

Rentner said that while it’s a significant allocation, it doesn’t keep up with what the flood plan says is necessary.

“I don’t think my faith is shaken that folks believe in flood plain restoration,” she said. “I just think maybe we don’t understand how to do it quickly. That’s the hard part. We need to take every opportunity we can to move forward as fast as possible.”